In 1976 our school, and maybe all of America, went Bicentennial Crazy.  Bicentennial celebrations covered the calendar for the entire year. And, that was the year that my grandma Green volunteered to make me a Betsy Ross costume for the Colonial Halloween parade.  We’d already studied the original US colonies more than you can even imagine, but we took a field trip out to a “colonial village” set up to experience colonial life.  It was interesting, at first, because who doesn’t love a field trip? I asked the tour guide where all the Black folks were, and she told me that there were no Black people, they came much later as slaves.

Ok. Nobody was Black in colonial America.

So, we get back to school and it’s time to pick who we’re going to be in the parade. I chose Betsy Ross. The women in my family liked to sew, and I figured that’s how we would’ve contributed to the independence of our nation if we’d been in the area at the time. My costume was elaborate, and made almost exactly like the pictures my grandma and I looked up in the encyclopedia.

My colonial obsession did not end with the parade, though.  I spent most of my free time quizzing my elders about their ancestors, particularly those who’d been enslaved. The conversations went mostly like this:

Me: Did you ever meet the people in our family who were slaves?

Grandma Green: I don’t know… I imagine that the first people who lived in the big house down south used to own the rest of us at some point. If I picked out the oldest person living down that lane where I grew up, they might’ve been a slave.

Me: Did your dad own Mama Hester? He was the white one.

Grandma Green: No, he didn’t own her. They were married! He was colored.

Me: Looks white to me. *conversation stops cold.

Me: did you ever meet the people in our family who were slaves?

Grandma Dobbs: I may have… I must have….

Me: Were they okay? (thinking about how torn apart I’d be if I were a slave.)

Grandma Dobbs: Yes. But they didn’t like to talk about slavery, and it was rude to ask. (raises her eyebrows at me.) * Another conversation bites the dust.

I have only one story about our first American. Out of all the people who were enslaved, only one story remains. My grandfather used to tell all or parts of this story regularly, and even now, the generations beneath me can tell it. I don’t know if it is true, even, but this is the way it goes.

My first American was a little boy who was happy and free and swam in the waters of the Cape of Good Hope every day. One day, he was stolen away from his family and sold into slavery. He was taken far from home and told to forget all about it. He tried, but he couldn’t forget what Free feels like.

Seeing as how he was a little guy, he was purchased by the captain of a slave ship to serve as a cabin boy. He made several trips running slaves from the Caribbean to New Orleans, and he saw terrible things; the inner workings of people being beaten, starved and tortured for profit, and he learned to hate his captain. But he emptied slop jars and spittoons, and made his captain comfortable despite the hatred- he’d seen too many people get hurt and killed for the slightest disobedience. Instead, he made a plan.

The captain liked my ancestor and thought he was a smart kid, which he was. He taught him to speak, write and read English on the open water, as sort of a party trick for the amusement of his shipmates. Not only did my ancestor learn to write the name the captain gave him, he also practiced writing all kinds of things. And one night, after the captain was asleep, my ancestor wrote himself a note. It gave him permission to be absent from the ship to gather supplies, and was signed with an exact replica of the captain’s signature.

The next time they docked in New Orleans, my ancestor waited while the crew to unloaded enslaved Africans and cleaned the ship. When it was dark, and the crew was out carousing before the ship left port, he put his letter in the pocket of a suit of clothes he’d stolen from the captain.  He wrapped them in a bundle that he held up out of the water as he swam for shore. He thought he saw the captain watching from above deck.

The boy, now a young teenager, hid in the mail station in New Orleans for days, using his bundle from the captain as a pillow, bedclothes, shelter from the rain… he stayed put until the slave ship had left port without him.  When people asked him who he was, he showed his note confirming his name was Ernest Dabbs, as the captain stated in the note and signed with great authority. The name was one he’d stolen and practiced from a crate he hid near in the mail station.

Even though he was free, he knew he had to get out of town; his ship would be back eventually, or the real Ernest could show up wondering why he and a cabin boy running errands for a slave ship might have the same name. So, he rolled up the sleeves and pantlegs of his new clothes and made his way West, travelling with a group of Native Americans who’d come to town to trade furs.

Ernest went all the way home with these guys and settled in.  He finished growing up, and got himself some land. He took a wife and they made some children – who had children, who had children until one of them made me.  Red and White and Black. African Americans.

That’s it. The Story of Our First American. It is no Hero’s Journey.  It’s a story about a child abduction and how the victim survived. How he fought his way back from incredible trauma to be a member of a community again. There is no rebellion, no return to the wharfs of New Orleans to liberate his people. Ernest was just a kid who did the best he knew how using what he had.

Thanks Ernest, for not giving up. Wouldn’t be here without you. 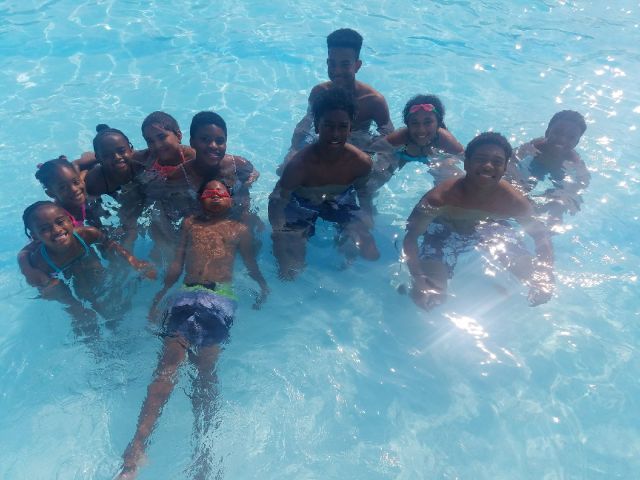 Michelle is an artist from Milwaukee, Wisconsin whose professional experience spans working as an educator, nonprofit executive, and consultant. She has a fear of clowns and pecans, and works every day to listen at least twice as much as she talks.
View all posts by thanks amen →
This entry was posted in ancestry, Family life, Uncategorized. Bookmark the permalink.