I seem to have taken a summer vacation from church.  It wasn’t intentional at all.  Or maybe it was.  Lately, something about church has made me feel so… useless.

Because I am female, my possible job openings, as far as the church is concerned, involve food and children.  Whenever people try to encourage me to be more involved in the life of the church, I’m expected to select from the following:

Kids and food.  All the stuff I do anyway!  And if I don’t want to share my talents around kids, or food, I am useless. I like kids fine, and I am an accomplished cook.  But I want to be a Deacon – A person who leads the devotions before the service, who helps the pastor to care for the congregation.  And, in 95 years of my church being a church, there has never been a female Deacon.  Never.

I told a former Deacon friend of mine once of how I could serve. He told me to convince my husband to try to be a Deacon and I could then earn the title of Deaconess.  I don’t know about your church, but in mine, Deaconesses support their husbands in doing God’s work.  But, what if I have work of my own to do; more than making sure my family is in working order and eats hot food every day?  Don’t I get a story to tell? Anyway, my husband doesn’t want to be a Deacon, I do.

My friend the Deacon told me we’d have to go to another church if I was determined to sit on the Deacon’s bench because, “We don’t do that here.  Women have other jobs.”  Yeah, like work in the nursery during services and set out the repast for funerals.

I’ve never had to be indebted to a man.  I hold my own in conference rooms and locker rooms and still, at church, I find myself mute.  Women are honored at my church one day a year. Women’s Day.  Until Women’s Day, we women sit with our knees together and our lips pressed tightly shut until we are given permission to speak.  Even then, what we say had better be a message that everyone will approve.

Everyone wears white, and extols the lengthy virtues of womanhood.

10 How hard it is to find a capable wife! She is worth far more than jewels! 11 Her husband puts his confidence in her, and he will never be poor. 12 As long as she lives, she does him good and never harm. 13 She keeps herself busy making wool and linen cloth. 14 She brings home food from out-of-the-way places, as merchant ships do. 15 She gets up before daylight to prepare food for her family and to tell her servant women what to do. 16 She looks at land and buys it, and with money she has earned she plants a vineyard. 17 She is a hard worker, strong and industrious.18 She knows the value of everything she makes, and works late into the night. 19 She spins her own thread and weaves her own cloth. 20 She is generous to the poor and needy. 21 She doesn’t worry when it snows, because her family has warm clothing. 22 She makes bedspreads and wears clothes of fine purple linen. 23 Her husband is well known, one of the leading citizens.24 She makes clothes and belts, and sells them to merchants. 25 She is strong and respected and not afraid of the future. 26 She speaks with a gentle wisdom. 27 She is always busy and looks after her family’s needs. 28 Her children show their appreciation, and her husband praises her. 29 He says, “Many women are good wives, but you are the best of them all.” 30 Charm is deceptive and beauty disappears, but a woman who honors the Lord should be praised. 31 Give her credit for all she does. She deserves the respect of everyone. 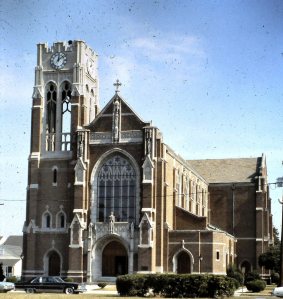 Do you have any idea how hard that is to live up to?  I’ve never seen as lengthy a biblical explanation about what a man’s work is.  We certainly have spent no time on it in our church, and it reminds me of when I was a girl, told in Sunday School that I was to be a helpmeet to a boy one day when he became a man, and the indignation that sprouted, even then. I told my father that day on the ride home that I was going to be the dad in my family when I grew up, not the mom, and he laughed.  It made perfect sense to me; Dads get to take you out, and coach your team, and feed you ice cream before supper, and tuck you in at night.  Mom’s cook. And they, according to all the evidence I’d collected in my young life, love to sweep.  I was far more Dad than Mom. Unfortunately, the Dad role is already taken in my present day family.  Someone’s got to be Mom.  Me.

Most of trustees are men.

And all of these people have teams (of women) making them look great.  They are learned, well dressed, cherished and loving.  I almost hate to say it, but they are able to be these things because their woman made time in their schedules for them to be so.

Mr. Mack was the best Deacon, ever. He knew about life as it happens, in addition to the rules about it from God, and how the two could come together in a functional way.  He offered his opinions freely, without pre-screening from his wife.  HE could stand by you in the good times, and the bad.

I want to be that.  Not useless.

I guess I could be an usher, but that would mean standing up and showing people to available seats most weeks.  I kind of hate talking to strangers.  Plus, ushers are supposed to be friendly.  I’m not.

Michelle is an artist from Milwaukee, Wisconsin whose professional experience spans working as an educator, nonprofit executive, and consultant. She has a fear of clowns and pecans, and works every day to listen at least twice as much as she talks.
View all posts by thanks amen →
This entry was posted in Family life, Uncategorized. Bookmark the permalink.